Considering they are the main targets in most horror movies, women have to come up with a lot of clever ways to survive the experience. Be it turning the tables, taking the fight head-on, or in some cases actually using the bad guy to their advantage. Every once in a while a horror movie will present a scenario where a woman finds a way to actually use at least one of the big bads to help her survive. Whether that survival lasts or not really depends on the woman and the big bad in question, but here are women from the horror genre that embraced their potential killers to help them. 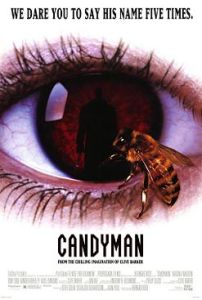 Towards the climax of the movie, Helen is locked up in a mental institution after the fallout of accidentally summoning Candyman. She needs to get out to stop him but has no real way of doing so. It’s not a matter of merely proving she’s “sane” because she is there for murder. So she does the only thing she can think of, she summons him. It is probably the shortest version of using the bad guy. But it is effective and is the only reason she is in a position to actually do anything to stop The Candyman.

Stretch accidentally finds herself the target of the Sawyer family and cornered by Leatherface when she notices his reaction to her. She’s an attractive young woman, and he’s pretty clearly a sexually repressed insane man. She uses this to her advantage and “charms” him into leaving her alone. Leatherface spares her and leaves. Later, when he tracks her down, he does tie her up but conceals her identity, and once again makes no attempts to kill her. When Stretch is found a 3rd time she’s SOL, but it does seem that if she stayed away, Leatherface’s attraction to her and her flirtation would have saved her life.

Clarice Starling, The Silence of the Lambs

This is perhaps the most well-known version of working with a big bad in horror. She doesn’t work with the main bad guy, but the one she does work with is little better. Clarice needs to catch a serial killer, and the FBI believes that Hannibal Lecter knows something about him. What starts as her being an uncertain trainee in over her head, turns into Clarice being able to build a bond with a serial killer. It even goes far enough to continue to pump him for information once she’s pulled from the case. Clarice is ultimately the one solves the case because she is the one that Hannibal wants to work with, and she is the one that knows him. Her working with Hannibal also saves her in the end. At the end of Silence of the Lambs, she is spared from of him coming after her, and by the end of the sequel their “teaming up” has worked to her advantage several times (at least in the movies).

Really it’s everybody that is using Feddy at this point, but we are going to give it to Lori since it’s her plan and she executes it. After losing many to both Freddy and Jason, Lori realizes that they need to team up with one of them. She intelligently deduces that while both are threats, Freddy poses a much larger one and comes up with a plan to help Jason overcome Freddy outside the dream world. Despite teaming up with one baddie, there are a lot of losses on their side. Beyond that, it’s unclear as to whether or not their plan ultimately worked. In true “we might want to do a sequel” slasher trash fashion the ending is entirely open. However, whether or not the plan worked, it was the plan to work with Jason, so I am going to count it.

Kristy accidentally solves the puzzle box in Hellraiser summoning the Cenobites after her. She does discover, however, that the Cenobites are looking for her late uncle and makes a deal with them. She will bring them their prize, and they will spare her life. It doesn’t hurt that said uncle, and her stepmother are also trying to kill Kristy, giving her double reason to work with the Cenobites. They do betray her in the end, but she is able to use the temporary alliance to save herself from Frank and Julia. She then buys herself time to work out how to free herself from the Cenobites themselves.

Returning to the list is Leatherface. Setting the massive plot hole that overshadows this whole movie, it still meets the requirements possibly better than any on the list. Heather starts as yet another victim of Leatherface before she winds up in a police station researching the events that happened. She ultimately sympathizes with him before she is captured and left for him as bait. Before Leatherface can kill her, he discovers that they are related and frees her. In the end, Heather returns the favor and helps him to kill the man that set her as bait and is attempting to kill Leatherface. Beyond just this temporary alliance Heather takes Leatherface home, and given the ending we are to assume takes up the mantel of caring for him and allowing him to continue to do what he does best, kill people. She doesn’t just embrace Leatherface to survive; she becomes his new caretaker and likely a kinder one than he’s had in past movies.