In 2013 Square Enix and Crystal Dynamics decided to reboot one of gaming’s most beloved franchises, Tomb Raider. Many millions of copies later we now have the 3rd installment of the reboot, Shadow of the Tomb Raider. While I have had a few complaints about the series overall, I am a huge fan of the reboot. I have enjoyed the way the series has moved from the first game where Lara didn’t believe in what her father taught her and was young, to now she is a full-fledged, willing to accept in the crazy, tomb raiding badass.

Shadow of the Tomb Raider opens on Lara still at odds with Trinity, the main antagonists from the last game. She knows that Trinity is searching for a box and key that her father researched and that she must stop them from finding it. When she finds the key she impulsively takes it, fearing what Trinity might do with it, the results of this choice are cataclysmic. From there she must race against not only Trinity but the end of the world itself, to find the box and set things right.

Shadow sees you taking Lara through the Amazon, and I loved this. While I didn’t mind the settings of the other games, this one is the most dynamic and has the most character. It’s not simply the jungle but also different types of towns, ruins, and settings that are beautiful and distinctive from one another. Just exploring the world crafted for Shadow of the Tomb Raider is worth the price of admission.

The gameplay is what we’ve come to expect, it’s a bit like Uncharted, a bit like the old Tomb Raider, with a few unique features thrown in. Since the reboot, I have been mixed on the series overall as far as gameplay. The first game had a few control issues, and for the most part, those were tightened up in Rise of the Tomb Raider. However, Rise added some gameplay features that were simply not needed. Shadow has the tightened controls from Rise and gets rid some of the features I really thought weren’t needed. On the flip side, it adds it’s own elements that I could do without. Concerning just how the game feels for combat and exploring Shadow seems to be the best overall. That being said it needs a little polish. Lara can be a bit hard to control because a few animations are slightly off and she will occasionally not nail jumps because the flow from part A of a climbing area to part B is not all there. It can be incredibly frustrating and cause failures that simply aren’t needed. 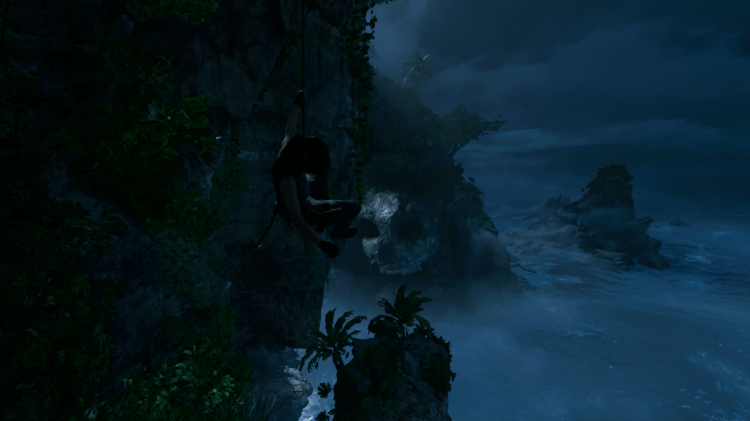 There is a similar, though seemingly upgraded, leveling and upgrading system. Instead of the three areas, you can level being laid out they are now intermingled on one map. Different skills take different amounts of points, and there has to be a least some effort to connect all of the upgrades. Upgrades for weapons can be either purchased or unlocked, case depending. The “new” system is neither better nor worse than what we had in the past. It looks different and has a few different skills and upgrades, but for the most part, works the same.

As with Rise there is the core game for Shadow and then plenty of side missions, challenges, and extras to find and exploring to do. Also as with Rise the core game is pretty short. In fact, it’s significantly shorter than the other two installments, almost disappointingly so. I try to stay away from the idea that a game must be a certain length to be worthwhile, but Shadow is short. Not only short, but it feels slightly incomplete. The Trinity storyline while compelling feels rushed and has several anti-climatic moments. Lara is still struggling with her place in the world as a Croft, but pieces of her arc don’t feel entirely fleshed out. It is also disappointing that the game shifts drastically towards most of the gameplay being extras rather than the main story.

There are still heavy and emotional moments, and while I was never drawn in as much as I was with Rise I greatly enjoyed the story.

So where does that leave us? Well, other than the setting being hands down the best in the new franchise overall this was not my favorite installment. Despite some annoying gameplay elements Rise of the Tomb Raider’s story sucked me in more, and the controls felt just a bit tighter. That being said, being second to Rise is not really a bad thing. I think Shadow of the Tomb Raider could have easily been the best of the three, but it almost feels a bit rushed and incomplete. A few moments with controls and animation feel like they need more work, and the story could have been developed a little further. It is still a good game though. The direction that Tomb Raider has gone in has been something that I have loved and enjoyed, and even with my complaints, I find myself playing the games over and again and, as of now, look forward to playing Shadow several times. Lara’s development is compelling, and there has been a great supporting cast of characters in each game. While I can easily say I find one storyline better than the others I have not found any of the games to have had a bad story.

If you are a fan of the other two games, I highly recommend this one, just maybe be prepared not to find it the best of the series. If you haven’t played the rebooted franchise yet you should, they are entertaining games. My hope with the future of the series is that Crystal Dynamics slows down a bit. If they are planning a fourth installment, I am willing to wait. Again Shadow is on the edge of being the best of the three but feels like it just needed a bit more time. Give the next game that time, make sure the story is fleshed out, the controls are tight, and the animation is polished.

In the meantime, I look forward to the future DLC and replaying the entire franchise many times over.

One thought on “Impressions: Shadow of the Tomb Raider”