Jurassic World Evolution kind of hit a lot of boxes for me. I love the type of micromanaging Zoo Tycoon esque games. I find them fun, relaxing, and they speak to the slightly compulsive person in me. I also love dinosaurs, I was obsessed with them as a kid (as many of us were), and have a long-standing love for Jurassic Park. This game should be one of my all-time favorites. After playing it (though admittedly not finishing it) I will say I like it, but am a bit disappointed.

I want to get the bad out of the way first so that way we can move on to the highlights (of which there are many). First is the lack of explanation for several important things. More often than not I found myself stumbling across essential things well after I should have discovered them. Things like certain controls, how to handle particular problems, and unlock certain things. I don’t like games that hold your hand, that’s not what I am asking for. What this game does is hold your hand in some instances but then completely neglect to guide you on the right path in others. 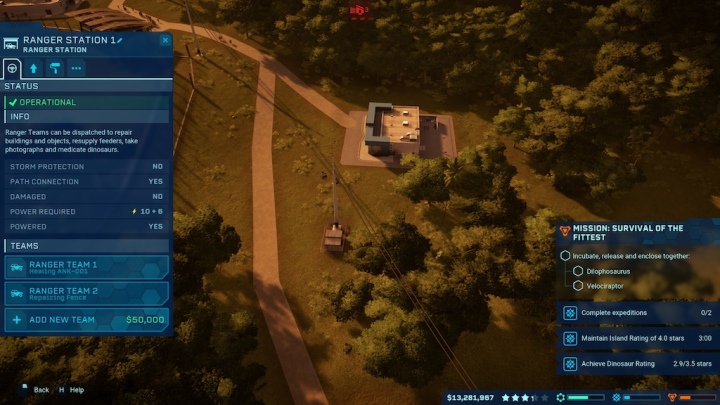 Several things also don’t control well. If a dinosaur breaks out, or one gets sick, there are different types of workers that help them, and this is fairly standard. However, you can’t just click on the problem and assign a worker to it; instead, you have to go from worker to assignment. Even with using the hotkeys (like R to pull up rangers) this still takes a lot longer and is less intuitive than it should be.

The biggest problem is that the game attempts to teach you “lessons” on each island. This is not unique to this game; several similar games do this same thing. You have an area, and it wants to teach you to overcome a specific challenge in the game. The problem is Jurassic World leans into this. The island that teaches you about animals breaking out and how you have to put them up, expect to be doing this constantly. There is basically nothing you can do to overcome this because that island is about learning how to compensate for that. This wouldn’t be such a bad thing, if not for the fact that you will spend hours on each island. You need to reach 5 stars on each island in order to unlock all the research in the game. So the second island (about fences) you will spend a painstaking amount of time dealing with broken fences and released dinosaurs. The 3rd island is about taking losses and turning it around, so if anything goes wrong your successful park will nosedive, and you have to then stay there and keep fighting it.

All of this aside this is hardly a bad game. If you like the Zoo Tycoon type games and things in that vein you will have fun with this. There are a lot of dinosaurs, and opening up the different research is interesting. Learning which animals will work together can be tedious, but overall it’s still somewhat fun to try different combos and keep moving towards bigger and different dinosaurs. While assigning tasks needs work the rest of the menus work well. The game also looks cool and has a lot of options for experimentation or just messing around. Build up a popular park and let the dinosaurs go and have fun watching the movie play out on your screen.

The sounds are also excellent, minus one glaring flaw. I don’t know why but Chris Pratt decided not to lend his voice to his character, Owen Grady. Owen Grady has far too many lines (almost every single one of them unnecessary) for being the only character not voiced by the actor that plays them in the movies. His character should have been cut, or they should have limited his dialogue. However, the rest of the lines are delivered well, and the building story from island to island works well. The sounds of the park work well too. This can be a problem with this type of game, it can get tedious to listen to, so solid audio is essential.

The game looks nice as well. There is a good amount of detail on the dinosaurs (the important characters), and the islands are beautiful and diverse.

All in all, it’s a good game, but it could have been excellent. A few tweaks to controls and gameplay elements and it would easily be one of the best games of its type. As it stands, it’s still a solid contender, and if you like this sort of game, I would highly recommend it. I am curious if there will be future DLC or expansions, but for now, I am enjoying the game as is.

If there are drastic changes to my opinions after finishing the game, I will update this Impressions piece, but I am not far from being done so I don’t foresee any significant shifts in my thoughts.

Have you played the game yet? Do you plan to? What are your thoughts about it?