I like games that give choices. I have ranted about how many games don’t give real choices (that the consequence is always the same), but the attempt to make choice part of the game is something I like. I tend to play “good” characters, and it can be sort of easy for me to make my choices based on that. Sometimes, however, games present me with choices that I simply don’t find any challenge in deciding what to do. There is no real struggle or decision making, I am presented with an option, and I’ve already decided. Also, remember this is coming from an entirely personal perspective. Some of these choices might be hard for you, or easy but you go the other way. That’s fine.

Warning for obvious reasons, this will contain major spoilers for the following games-

-read at your own risk.

I realize I am in the minority with this game overall. I did not find it bad, but I did not find it good either. It did some cool things, but to me was held back by a story that was far too obvious and leading directly to the easy choice, characters that I just didn’t care for. Max finds out that she can bend time when she does so to save her old friend from childhood Chloe. The two girls reconnect and occasionally look for Chloe’s missing friend while doing so they notice a lot of weird things happening in the town. Eventually, they are faced with the fact that Max bending time to save Chloe is going to mean the destruction of the town. In my opinion, Chloe does exactly one thing in the entire game that makes her an okay character, and that is telling Max to go back in time and let her die to save the town. The choice was easy for me to make. Save a completely selfish person against her will letting many others die or honor her one decent request and let her die. No struggle at all. 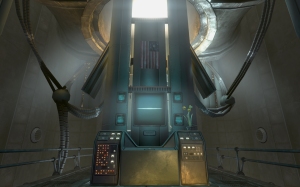 There are a lot of choices in this game, a few of which I found easy to make. The easiest, however, is whether or not to use the F.E.V. sample given to your character by the President. If you use it, super mutants will be wiped out, but along with them so will ghouls and a large number of humans. The main problem I have with this choice is that it’s the “pro-Enclave” choice to make in the game, but you’ve never worked with them. There is no point where you do quests for the Enclave, get into their inner circle, or even see their viewpoint on what they are trying to do with the wastes. They are the bad guys pretty much from the get-go, and then you are given the choice to help them? It’s… odd. I felt no motivation to go with their plan, and so I didn’t even consider it.

I love the Mass Effect series, let me just get that out of the way before I knock it. Throughout the series I find a number of the choices to be pointless, in fact when ranting about meaningless choices this series is one of my go-to punching bags. To me, one of the biggest offenders is the end of Mass Effect 2. You are given a choice to save the human reaper for Cerberus or destroy it. Morally speaking it’s a pretty easy decision to make, what ultimately makes it easier, however, is how pointless it is. Saving the human reaper gets you nothing. You don’t get more preparedness points in the 3rd game. Cerberus still hunts you down and serves as one of the main enemies. There is zero benefit to choosing to save it, so why would you? I am sure others have their reasons, but it’s pretty cut and dry to me. It’s the choice between doing something amoral and gaining nothing or moral and gaining nothing, easy.

This is another game where I am in the minority opinion. I don’t care for it all that much, and I found the big choice at the end way too easy to make. Ultimately, you get through the game with Clem who is being pulled by both Kenny and Jane about what choice to make for the group. Now neither Jane nor Kenny are all that great of people, but Kenny is especially nuts. He was an asshole in the first game, and he leans into it in this one. Kenny has clearly gone off the deep end and is willing to do anything to make what he believes is right happen. We went through this in season 1, and it didn’t end well. Choosing between Kenny and Jane was just not that much of a struggle for me. The only reason to choose Kenny is simple curiosity about how it plays out.

This is not so much a choice, but rather a series of choices throughout the game. In Bioshock, you eventually come across the little sisters, girls that have been taken from their homes and experimented on to be collectors of ADAM. You need ADAM in the game for upgrades, so you are given a choice. Save the little sisters for a little bit of ADAM or kill them for a lot. The choice was easy for me; I am not spending a huge chunk of the game tracking down little girls and killing them, I’m just not. I can be morbid with the best of them, and this is too much. What little struggle the choice presented to me is solved by the fact that for every three little sisters you save you get bonus ADAM. That’s right, it might take a while to find out, but you are ultimately told you will get the same amount of ADAM regardless, it might just take a little longer if you go the not killing little kids route.

In the end, these choices are easy for me, and when I go back to replay the games (if I do), I often find myself just making the same one(s). The only thing that gives me pause is the simple curiosity in how the game might play out if I were to make a different choice.

Are there any “difficult” game choices that are super easy for you to make? Do you disagree with how easy some of these choices are? Let me know!