Many years ago I was talking to a friend who is much wiser than I and guilty pleasures came up. Now I can’t remember the entire context of the conversation, but it was simply about how she had heard/read and agreed with someone saying there should be no guilty pleasures. That pleasure for the sake of pleasure is fine, and the idea that guilt or shame should be attached is wrong. It’s wrong for you, and it’s wrong to the people that created these so-called “guilty pleasures”.

Obviously, I forgot the details, but the overall point lingered with me. I instantly agreed, but it took me awhile to come around to showing this in my own words and actions. Now I am not going to say I never use the term “guilty pleasure” I do. As a phrase, it’s a good shorthand when discussing certain types of media. I have reached a point however where I can actually say I am over the guilt and shame of these things.

Not everything can be “high art” or whatever you want to call it. Airplane books are great. Popcorn movies are wonderful. Songs that just make you want to dance are amazing. Games that let you zone out and relax are marvelous. Entertainment simply for the sake of entertainment has great value. The reality is most of us have a lot going on in our worlds, too much even at times. Things that allow us to simply relax and find pleasure are perfectly fine.

Do I like movies that challenge me? Make me think? Blow me away with their artistic direction? Of course, I do, I love those movies. I also happen to like Clueless. It makes me laugh, it’s colorful, it taps into nostalgia for me. Why should I be happy to loudly proclaim one but not the other? Hell even looking at Clueless, most of Austen’s works could be considered just fluffy entertaining romance, and the resulting modern interpretations can be downright enjoyable. Yet we don’t often embrace what we enjoy, and we don’t allow others to do so. There always has to be a qualifier when admitting to liking our fluff.

I can remember before I quit college talking to other people in the film department and admitting that I liked Brad Pitt. The resulting teasing was meant in good humor, but left me only thinking, “How uptight are these people?”. For a long time, I tried to justify it. He’s been in some damn good movies, not the least of which are things like Snatch and Fight Club. Eventually, I realized, however, I was never going to convince those people that it was ok to like Brad Pitt because they are hardwired not to like him because he’s simply been in too many “guilty pleasure” movies. I also realized that I simply didn’t care. I can watch Snatch every day and still enjoy the hell out of it, and Brad Pitt’s talents go a long way towards that enjoyment. Whether or not other people are ok with that simply doesn’t matter. It’s whether or not I am… and the older I get, and the more secure I am in who I am, the easier that is.

As another example, the Mario and Rabbids game received a lot of razzing on the internet. Some people it was mostly meant in fun teasing. Other people simply could not stand the idea of something so silly being made. When a picture of the creator crying in pride was passed around a few people sort of stopped and reexamined their ideas about this. Now I am not going to pretend to be into the idea of this game. I find the Rabbids more annoying than actually amusing, but that’s just my opinion on a personal level. I never understood why people were having such a negative reaction to the game. Games that are fun just for the sake of having fun are great. I’ve lost days if not weeks of my total life to games that just let me sit back and enjoy. Some of my tops are Lollipop Chainsaw, The Sims games, and Viva Pinata. When Katamari Damacy was originally designed the intent behind it was a game that was supposed to allow the players to just enjoy without overthinking. There was no reason to hate on the Mario and Rabbids game, who cares that it was silly, silly is great. If you don’t want to play it I understand (again it’s not for me), but if others do I get the appeal. No one should feel guilty or shame for that, and no one should attempt to make others feel that way. 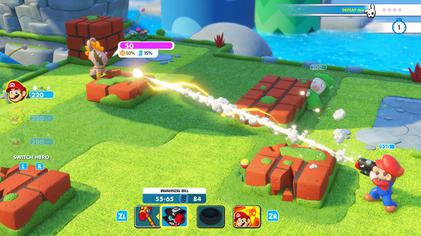 But there is still this prevailing feeling in society that we have to make sure that everyone knows that we understand that guilty pleasures are just that. We don’t want people to think that we honestly like some of these “easy” things. They have to know that we also like challenging and complex things, but it’s getting harder and harder to understand why.

As I said entertainment for the sake of simply being entertained is perfectly fine. It’s more than fine. When I am at a low point I just want something that will smile and make me laugh. When I am stressed I want to sit back, unwind, and let something wash over me. When I just want to have fun, I just want to have fun. The idea of any sort of guilt or shame connected with that is ridiculous. We can all acknowledge that internally I believe, but I think we still struggle to say it out loud and proud. Every single one of the people that teased me for liking Brad Pitt liked their own fluffy things. I know this because they would talk to me about those. The difference is in how they reacted to my confession vs how I reacted to theirs. Again the older I get and the more secure I am the better I believe I react to my end of both conversations. Some of us get over this idea better than others, but it seems to always be there in the back of our minds. That even when we are proudly talking about the things we love there is a certain need to say, “That’s right, I am rebelling against those that would judge me for what I like”.

I can’t convince people to change themselves or even agree with me. My thoughts on this subject might not be right. There might be a good reason to acknowledge the difference between guilty pleasures and not. But where I am right now there is no guilt or shame over the things I like, and I hope not only to keep feeling that way for myself but to help others feel that way too.

With that, I am going to go watch, play, or read something light, easy, and perhaps a bit fluffy. Let me know your thoughts on the subject and even some of your favorite things that would be labeled as a “guilty pleasure”.

3 thoughts on “No Such Thing as a Guilty Pleasure?”

© Megan E. Pearson and megan-e-pearson.com, 2015-2020. Unauthorized use and/or duplication of this material without express and written permission from this site’s author and/or owner is strictly prohibited. Excerpts and links may be used, provided that full and clear credit is given to Megan E. Pearson and megan-e-pearson.com with appropriate and specific direction to the original content.